I had this really great opportunity to leverage my expertise to support an article written by Susan Lacke for Triathlete Magazine’s on-line presence.

So, why do we practice structured breathing?

Great question!  A breathing practice has shown to reduce levels of anxiety which can impact our physical responses like blood pressure, heart rate, and even GI function.

This practice doesn’t need to be time intensive or overly complicated.

Here are some of the exercise examples:

Interested in getting more information?  Want an audio clip talking you through this?  Drop me a line!! 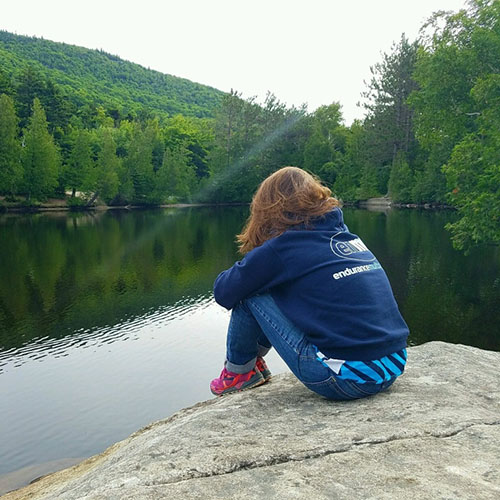 Head in the Game

Four years ago, I toed the line of a marathon that pulled the carpet out from underneath me. I didn’t realize how thin the ice was; I fell through, hard. I bonked with 10 miles to go. Ten painful miles that were littered with negative self-talk. I was gunning for a Boston qualifying time, only to see it slip away.

I thought I had my head in the game, but I was only looking at the surface.

This evening, I went for my daily mile run (day 275) – an honor to my late grandmother, a meditation, a movement prayer. I started walking. My body is still feeling the effects of having run 40 miles last Sunday. As I rounded the corner, I pulled my hat lower and started shuffling my feet.

I said to myself, “I have my head in the game.”

I thought I had my head in the game in 2015. Nope. I crashed and burned. I needed to work on myself before my body would follow.

These were all the thoughts I had tonight…the anniversary of this marathon.

Since then, I’ve completed two more marathons, a few 13.1’s, a few triathlons, including two half iron distances, and one ultramarathon (a 40-miler). I’m surrounded and supported by a great tribe, but my foundation is what I have built in my heart and between the ears. I’ve done the work; the body is now following.

I’ll certainly get back to attempting a BQ time again; I’ve just found more important goals. I also learned that one race, one time, one anything, doesn’t define me as an athlete, as a person.

I define me.
I have my head in the game. 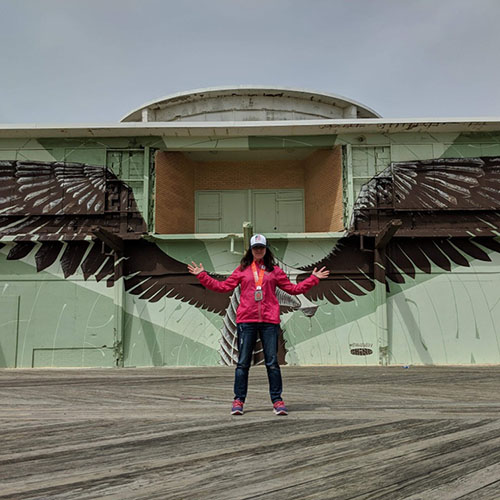 Race day is upon us. Use these techniques to help calm your nerves, approach the day with gratitude, and give you the tools when things get tough.

The excitement of race day can stir up some anxiety that can be an advantage. Too much anxiety can negatively impact your outlook, your physical responses, and even your racing. Take a moment to look around — you’re surrounded by individuals striving to put forth their best foot. Enjoy their company. Find comfort in knowing you’re not alone.

I’m guessing you just took a good breath. Breathing is an automatic response: we don’t have to think about it, but most of those breaths are shallow. Often times, we need the reminder to take a moment to focus on a few cycles of deeper breathing. Close your eyes and take a full breath from your belly. Feel the rise of the abdomen on your inhale; feel the release of your tension on your exhale. Repeat. Breathe.

Mindful breathing will calm anxiety, lower blood pressure, and facilitate full oxygen exchange. This is a great practice to implement before the swim leg.

Put on Your Power Suit

Sure, this is your tri kit, or race gear of choice, but it’s bigger than that. Be mindful when getting dressed — you have somewhere important to be. Stand tall, shoulders back, head lifted. Like Wonder Woman, Ironman, or your favorite super hero, you have your own power suit. Now, how do you feel?

A mantra needs to be individualistic — the mantra for your training partner might not be a good one for you. So, how do you pick a mantra and why do you care? A mantra is going to be a word or a series of words that help keep you moving through both good and bad times, either in training or in a race. When you put on your power suit, how do you feel? What emotions or positive words present? Recall that feeling, those words, that emotion, when you’re hitting a wall.

Let’s recap: you took a moment to breathe deeply and you’re all dressed to the liking of your favorite super hero. Now, plant yourself at the start. Visualize your feet screwing into the earth; don’t sink into the ground, rather reflect your energy against that connection. You are like a stalagmite shooting up. Take a deep breath and reengage with your mantra.